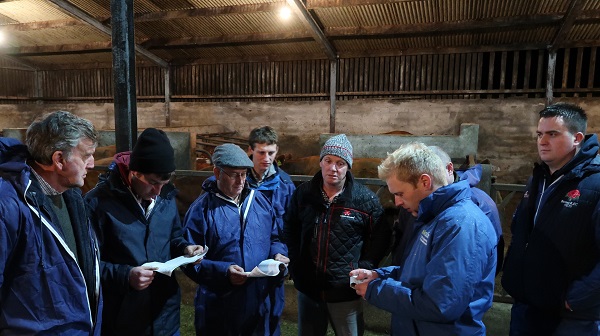 Ten years ago David made the decision to move from purchasing replacements to breeding them from his own herd. A three breed rotation has been in place since with Simmental, Limousin and Shorthorn bulls providing a continual selection of replacement heifers coming through. Over 90% of all cattle on the farm are now homebred. Bulls are carefully selected using EBV’s to ensure the best maternal traits available are used. A Charolais bull is also used as a terminal sire to cover cows not deemed suitable to breed replacements. Surplus females are mainly sold for breeding, either as maiden breeding heifers or with a calf at foot. Male calves and heifers not suitable for breeding are sold off the cow at approximately 10 months of age.

By utilising maternal genetics David appreciates several benefits including the ability to keep a closed herd which has helped reduce disease challenges. Additionally it allows for greater control on the genetics influencing the herd and also helps to reduce the number of cows requiring assistance at calving. In 2019 David’s herd had a calving index of 374 days which is considerably lower than the industry average.

David had considered BovIS to only be of value to suckler producers who finished cattle off their farm. But after attending a BDG meeting last year he became aware that there was also now the facility to access the slaughter data of stock marketed live but subsequently slaughtered through one of the main Northern Ireland processors.

David pointed out that this data was useful for him for 3 main reasons:

All users of DAERA online services can access a BovIS herd of origin report. It gives weanling producers like David an opportunity to see how calves performed from birth to slaughter, giving slaughter information such as grade, fat class, carcass weight and daily carcass gain to the original breeder of the animal. Data like this can then be used to assess both cow performance and bull performance to allow farmers to make informed decisions on their breeding policy.