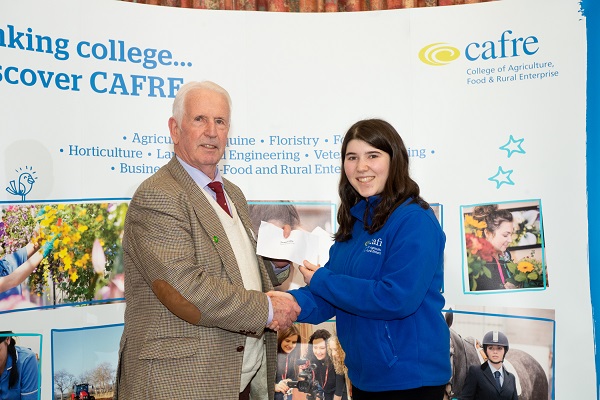 Rachael Addy, from Dromore in Co.Down, receives a £1000 bursary from John Chambers of the Tyrone Farming Society

Rachael Addy, a first year Honours Degree in Equine Management student, was the lucky successful recipient of the Tyrone Farming Society’s bursary which was awarded as part of the Careers Day at Enniskillen Campus.

First year Honours Degree students, who choose the equitation module, were required to produce a report on the influence the training scale has on a horse’ way of going and its impact on soundness and longevity.

Rachael comes from Dromore in Co.Down, she has a keen interest in show jumping and eventing.  Over the years Rachael has developed a deep love of horses and enjoys working with them in hand and under saddle.  Rachael intends to work in the equine industry and has joined the Honours Degree to further develop her equine career.

Racheal is extremely grateful to the Tyrone Farming Society for the opportunity to win the bursary and intends to use it to support her time at Enniskillen Campus.

CAFRE would also thank the Tyrone Farming Society for affording the students the opportunity to obtain a bursary to assist them with their studies.