Anthony Conway along with his son Sean farm suckler cows and sheep just outside Newtownstewart in County Tyrone. When the Business Development Groups (BDG’s) were first launched in November 2015 Sean joined his local suckler cow group. In 2018, following on from Sean’s experiences with his group, Anthony applied and was accepted to his local sheep group 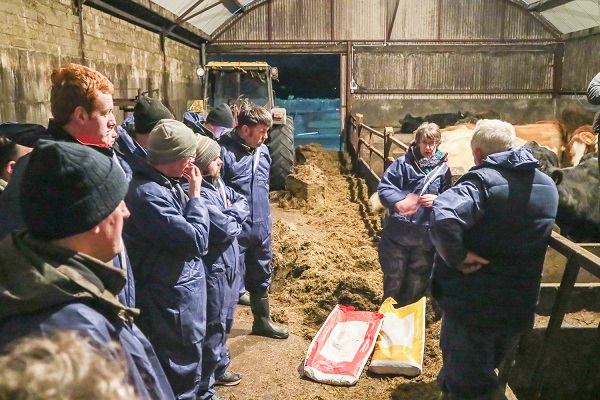 Sean hosted his suckler cow BDG on the evening of the 6th of March where the group were given a farm overview and rundown on their current system and practices. Local vet, Maria Morris also attended to provide professional advice on the main issues to be addressed when preparing for and managing calving in suckler cows.

The group discussed the feeding of pre – calving minerals with Anthony showing examples of minerals fed on farm. In addition to powdered minerals the Conway’s  also apply 7 ml of 5% Tincture of Iodine to the flanks of their cows at least four weeks pre – calving. A lack of vitamin E, iodine and selenium can result in more difficult calving, cows holding the placenta with calves slower to rise and suckle. 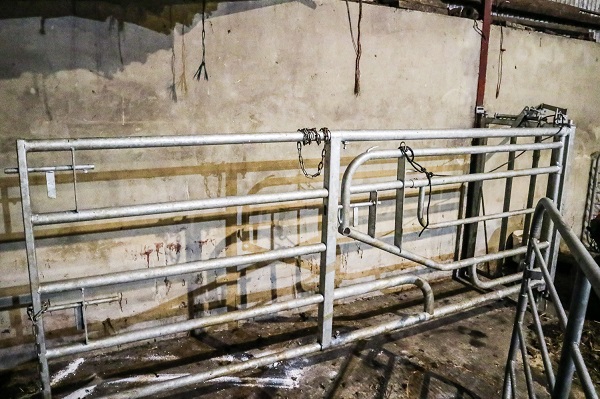 A calving gate similar to the one recently installed on Sean’s farm.

The group assessed the body condition score (BCS) of the spring calving herd. According to Ms Morris, cows achieving a body condition score of less than BCS 2 at calving can be slower to get back in calf, have more health issues, lower quality colostrum and lower milk yields affecting calf growth rates. Sorting and feeding cows according to BCS, can result in savings on the amount of silage consumed. It was also stressed that trying to adjust BCS in the final weeks of gestation was not advisable and in fact during this period cows should have access to ad lib silage.

Some group members questioned the use of scour vaccines. On group members farms where scour had been an issue, vaccines were seen as money well spent, reducing labour requirements and improving calf performance. Hygiene and good management was also deemed necessary to reduce calf mortality.

Ms Morris pointed out that as calves are born with no immunity they are dependent on antibodies received from the colostrum of their dam. Three to four litres of colostrum is essential as soon as possible after birth. The level of antibody absorption from colostrum is likely to be minimal once the calf is 18 – 24 hours old. Where possible farmers should build up a supply of frozen colostrum preferably from cows on the farm.

The Conway’s move their cows to the calving pens at least one week prior to calving. This allows the animals to settle into their environment, reducing stress while also avoiding delays in labour. Pens are cleaned and disinfected with a good covering of straw to ensure a clean and dry bed for the calf.

A new calving gate has recently been purchased on the farm. According to Sean and Anthony the calving gate in the shed is very important. Apart from the obvious benefits at calving, it also allows the cow to be confined for safe working with the calf (tagging/injecting), which is especially important if you are on your own.

The first cow from the spring calving herd is due to calve within the next few days. Sean has all the calving equipment available. The calving jack and ropes are clean and disinfected. Disposable gloves, lubricant, iodine, electrolyte and the stomach tube are ready and waiting for action. This will be a busy time on farm with 430 ewes also ready to lamb.

The group finished the meeting indoors with a good discussion and sharing of experiences both past and present on issues faced during the busy calving and lambing periods. The next meeting for the group has been arranged for early in May when we will visit another group member’s farm and discuss where grazing management will be the focus of discussion.